Hear No Evil / See No Evil 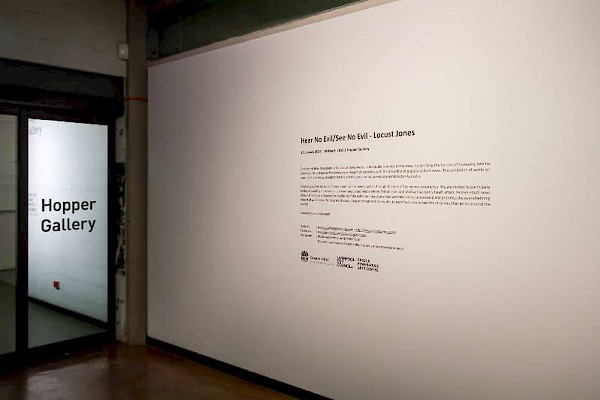 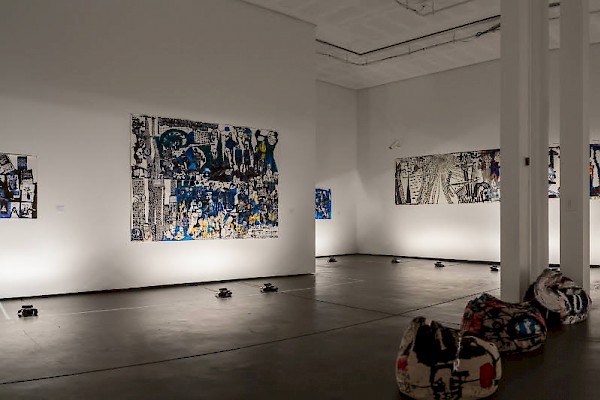 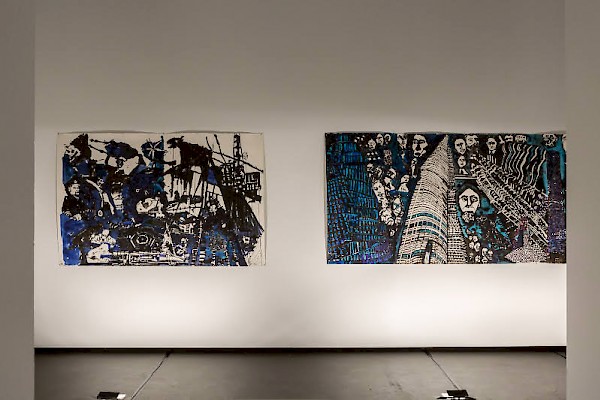 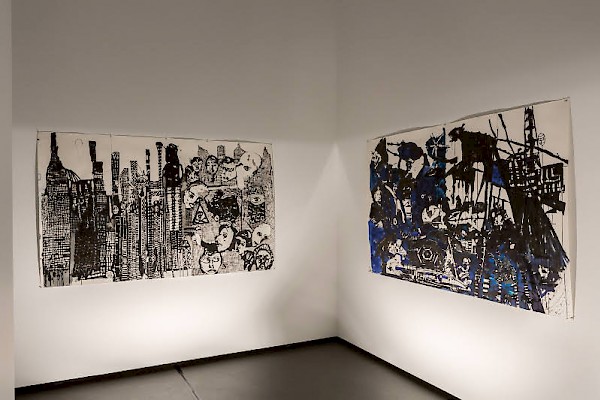 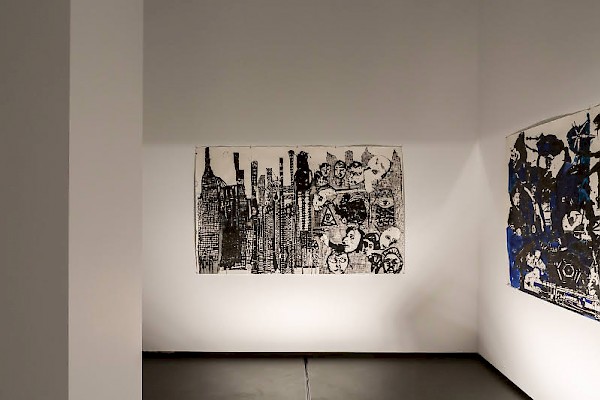 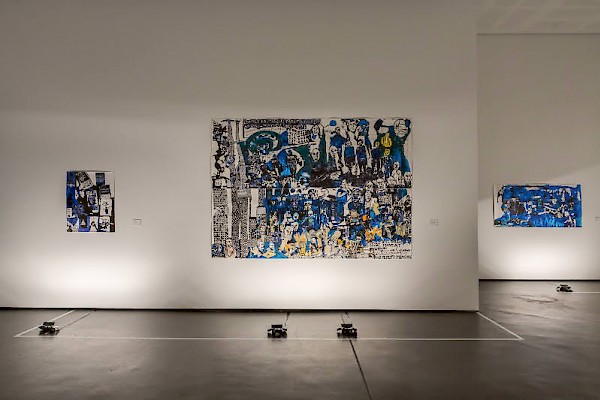 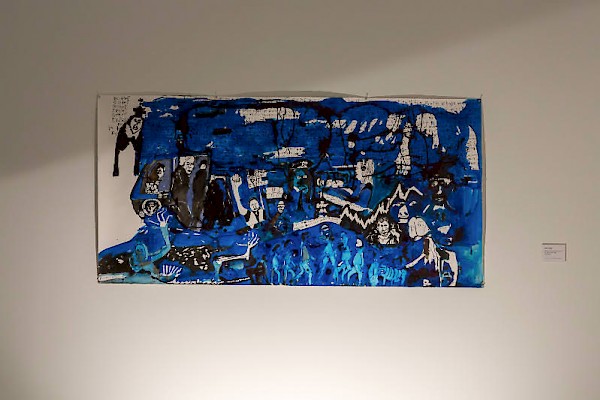 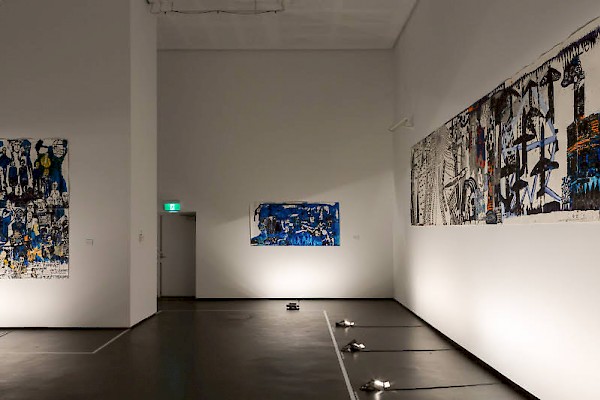 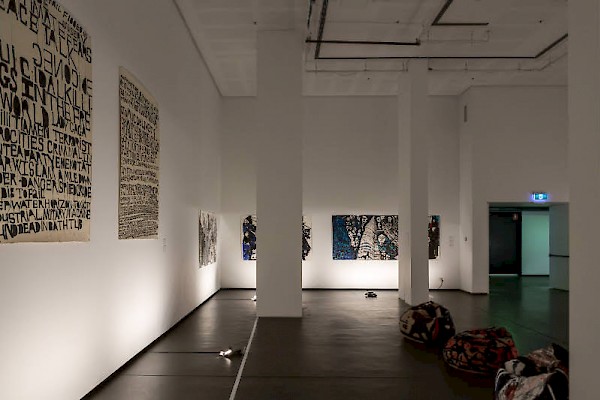 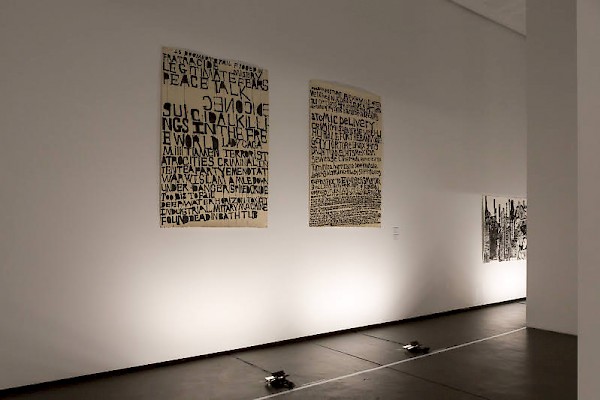 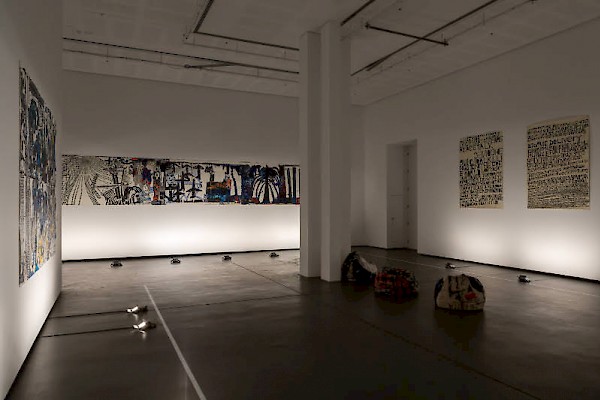 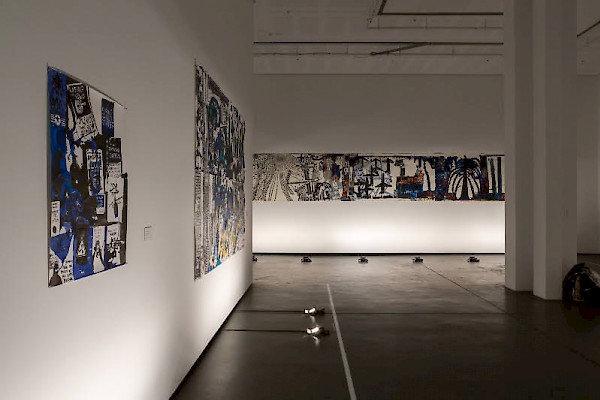 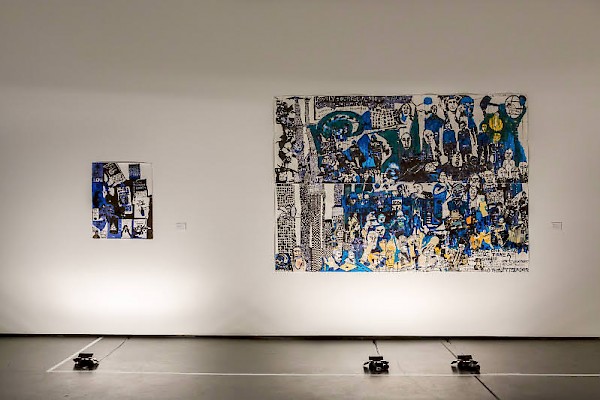 Fragmented text referencing news and current affairs recurs across Locust Jones’ work for his solo exhibition Hear No Evil / See No Evil at Casula Powerhouse. Much of this text has been overlaid with depictions of crowded scenes: in one there’s a mass of congregated figures, in another, a towering metropolis with a patterned background of fighter jets and bombs. The figures themselves are almost cartoonish, having been reduced to outlines, sometimes only appearing as floating heads with mug-handle ears and gaping mouths.

Destruction, pain, war and famine loom large in Jones’ works on paper, but this is countered by pop culture reportage or the construction of the tallest building in Dubai—news of Michael Jackson is placed right alongside the disappearance of flight MH370. And then there’s the lightness in the choice of medium: oil on canvas would be too thick and heavy-handed here, instead the ink allows for a kind of featheriness or quickening: bruise-coloured pools swallow each other up and there are unruly drips and sprays. And yet the splattering of the ink across the paper made me think not only of newspaper-ink-finger-stains, but also how easily blood is spilled, how quickly it can run, and, like ink, how difficult it is to wash out. It’s perhaps due to the ease with which this association comes (T.S Eliot: ‘the purpose of literature is to turn blood into ink’) that Jones is selective with his palette—the prevailing colours are black and blue, the occasional yellow and orange, and a single blazing red ball.

Although each work is deliberately time-stamped with its references to the news and current affairs of a particular day or week, its meaning and affect does not remain fixed to that particular moment. That is to say that no matter the time of its creation, each of these works appears in conversation with the present. It isn’t possible to look at Jones’ quotations from 2015 in ‘A Week in the Life of the World’—ISIL written delicately in pencil, or the phrase ‘Europe Nervous’—without thinking of what is to come, and where we find ourselves now.

But I also want to say this: because I am of an anxious disposition and my outlook on current affairs is not one that often lends itself to optimism, the most prevailing feeling that I get when standing in front of Jones’ work is a peaceful one. The exhibition makes me feel calm, not because the works themselves are calming in their depiction of everyday violence, but because they mark down the 24-hour news cycle, and in doing so act as a form of witnessing. Jones is working the paper in much the same way as those who weave medieval tapestries. In both scale and content the approach is similar, but instead of presenting a record of the Battle of Hastings or the search for the Holy Grail, Jones is creating a never-ending monument to our times, albeit a flimsy one in its materiality.

Perhaps it’s better to say Jones is undertaking the futile and never-ending task of attempting to notate everything all-atonce, to pull all threads together. ‘Cruelty is a mystery, and the waste of pain,’ writes Annie Dillard, ‘but if we describe a world to encompass these things, a world that is a long, brute game, then we bump against another mystery: the inrush of power and light, the canary that sings on the skull.’

For Jones, the brute game and the canary exist side by side. It’s possible that it will seem strange, heartless even, to align these works with an overriding sense of calm. Do I get some sort of pleasure out of seeing atrocities placed right alongside text references to Lady Gaga and a bathtub? Is it somehow perverse that one of the first phrases I wrote down after seeing the exhibition was ‘blue serene’? And yet, as Helen Garner argues, ‘there’s no point roaming around looking for comfort…Comfort is like grace. You can’t earn it, or deserve it. You have to thrash on, bearing things as best you can, and hold yourself receptive for the moments when it comes to you of its own accord.’

So, although it may feel inexplicable, although it may well seem unwarranted and unjustified to make a claim for comfort in this instance, it is here, in Jones’ works on paper, that I find it.