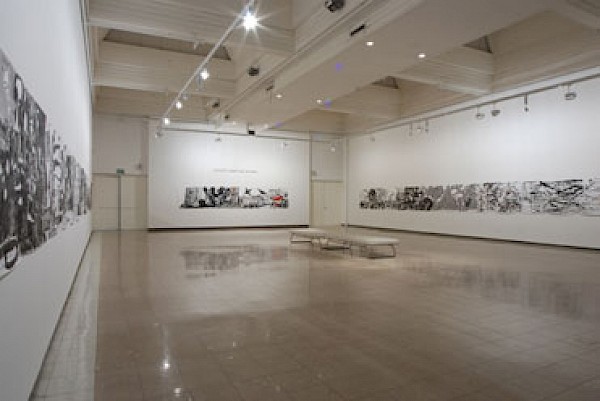 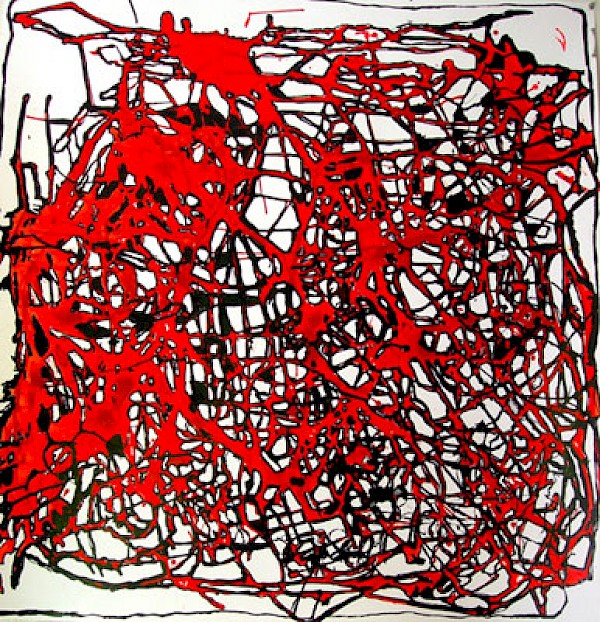 Two footsteps into Locust Jones' almost monochromatic park and a gallery visitor catches me mouth agape, at once hemmed in and struck off balance by two massive scrolls of paper that stretch the length of the Mair Gallery. Black acrylic and ink have been applied varyingly, now gossamer, next leather. The result is an intensely inhabited world - scraggy faces and jagged situations. A show that is a continuation of Jones's vibrancy.

By no means should quantity or scale be confused with quality. Big art, especially big painting, has a lot to live up to. Delta Park is a mountain, the ascent is exhausting and exhilarating, with unbridled satisfaction waiting at the top. Nine woodcuts piled high in a neck-craning fashion are preparatory study for the exhibition; they are the symbolic keys that unlock Delta Park. The woodcuts are primal, like a set of Neolithic tarot cards in swampy greens, waxy yellows and bleeding-heart reds. Each piece presents a pared-down motif of suffering; scenes that are repeated throughout the exhibition - skeletons, bombers, dungeons, estate blocks and weapons of torture and death.

In function the scrolls are only a step away from cave drawing, Jones uses an ancient medium to present contemporary crises. No space is wasted, the detail almost spills onto the walls. In form, the space of two metres can start with black Pollocky drips that morph into planes to birds and then into tie-dye orange fingers. The transformation is seamless.

In one of the scrolls, a timeline marks the deaths of Peter Brock and Steve Irwin, and Hugo Chavez's "Bush is the devil" remark; each entry with its own caricature. Amid it all Jones quips about expressionism being dead and questions where this work falls. Indeed it is an important question to ponder. In History Lesson, the polar ice caps melt, freedom fighters march, piles of skulls mount and humans are given ghostly shells. The effect is not unlike a red-raw Richard Killeen cityscape.

Across the way, Saddam hangs again, Exxon, Haliburton and the corporations are hung out to dry and a dash of red is dragged through white rivers of acrylic. Blood runs through the streets. A catalogue of horror committed in our own time. But this is the problem. A news watcher is subjected to the same thing each night and is barely moved to comment. Jones derides Murdoch et al, but is guilty of using their tactics; powerful footage slipped into the greater picture.

Where are the answers, the solutions to the problems Jones portrays? In the largest section of text, Jones addresses the question and hedges his bets: "some would say what about me, what is he doing about what he writes about, well I am doing what I see fit protesting and upsetting people". The conundrum of political art remains: how to convince a public of something of which they are already aware? Delta Park will be remembered for the skill of the imagery but the message will fade.